Travis Head’s brutal counter-attacking innings brought England’s failings with the ball into sharp relief on ‘potentially one of the worst days of the series’ for the beaten tourists.

The English media gave Head – who will captain Sussex in county cricket next season – due praise, but it was in the context of their team’s sloppiness in allowing their hosts to wriggle free from the perilous position of 3-12`early on the first day.

Former England seamer Jonathan Agnew, commentating on the BBC, described the opening day in Hobart thus: “This has potentially been one of the worst days of the series.

“England have basically been let down by batting throughout but today the bowling was depressingly poor.”

Team selections have been an issue for England since day one of the series, and Agnew felt England should have opted to select the more controlled Craig Overton over the express pace of Mark Wood.

“Mark Wood had a really off day. I wouldn’t have played him here. It’s a grassy pitch and has Craig Overton written all over it.

“It’s always nice someone roaring in and bowling 90mph but on this pitch you don’t want that. You want someone controlled.”

But Wood wasn’t alone as Head, Marnus Labuschagne and Cameron Green wrested back the ascendancy.

Ollie Robinson got a whack from the team’s bowling coach after play, having again failed to fire at full fitness through the play.

The 28-year-old seamer was rested for the fourth Test but returned to the side in place of James Anderson. He began with a probing opening spell in which he took 2-15 in seven overs but he could only get through one more over after the first interval, during which the speed of his bowling to around 115kph.

He then let the field with a back spasm, leaving England a bowler short for the final two sessions.

Jon Lewis, England’s bowling coach, said the Sussex seamer had to do more to get to the fitness levels required of an England cricketer.

“It [Robinson’s fitness] is something he’s definitely looking at and definitely we are working with on it with him,” Lewis said. “If he’s going to perform consistently over a long period of time at this level, he’ll need to be a fitter bowler, 100 per cent.

“We’ve had those conversations, we’ve been pretty frank with him. And now it’s up to him to go and do the work.”

“New ground, same old story. England threw away a good start against Australia and the move from the mainland to Tasmania looks like a trip too far for a broken bunch of players,” wrote Nick Hoult in the Telegraph.

“English hands were on hips and shoulders sagged as Travis Head broke any remaining resolve with a brilliant second century of the series, and Cameron Green showed why he will be an Ashes star for the next decade as Australia reached 241 for six before the lightest of rain persuaded the umpires to come off.

“Ollie Robinson bowled beautifully with the new ball but his lack of conditioning became a problem again, as he stiffened up and bowled just one abject over after lunch, barely reaching 70mph, leaving Joe Root a bowler short.

“Robinson has skills, and is an intelligent bowler, which makes it worse that his fitness levels, something he can control, are such a problem. If he is to last in Test cricket he has to be more professional and England tougher with their players.

“It is hard to imagine Justin Langer, the Australia coach, allowing one of his bowlers, especially one who is only playing his ninth Test, so much rope. Robinson played golf on the players’ day off on Tuesday, when colleagues such as Chris Woakes decided to prepare instead for the Test. It is no surprise he had a bad back three days later, letting Root down. He has gone off in every Test with a niggle.”

“Chris Woakes is often called an English specialist. At last, Down Under, here was a situation to remind Woakes of home,” he wrote.

“The mild temperatures and green tinge at the Bellerive Oval, Australia’s southernmost ground, resembled that found 10,000 miles north in England. And, just as so often at home, Woakes arrived in the attack with England’s new-ball pair having claimed early scalps.

“England’s finest passage of play in the series – admittedly, an accolade up there with being Henry VIII’s favourite wife – had seen Ollie Robinson and Stuart Broad reduce Australia to 12 for three. By the time Woakes was entrusted with the ball, in the 16th over, that had inched up to 41 for three. Yet it still allowed Woakes the chance to convert England’s early advantage from promising to match-defining.” 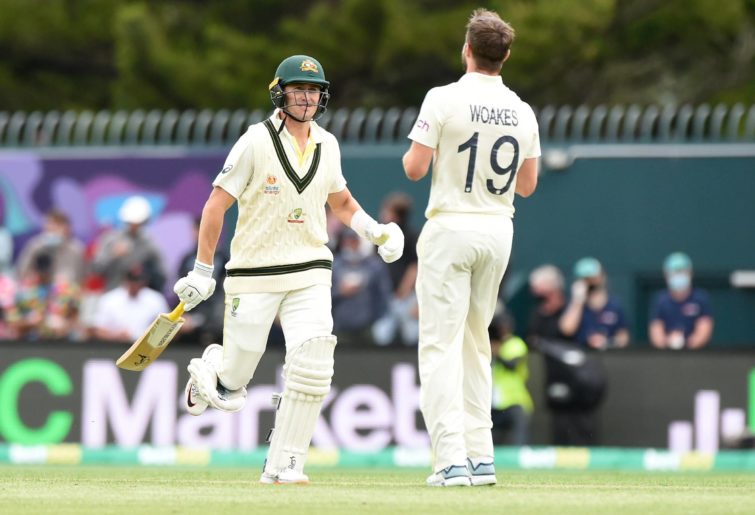 He failed to do that.

“The upshot has been to cement Woakes’s hold on a curious record: the highest difference between his averages home and away of any seamer with 100 wickets in Test history. Woakes has two faces: almost a prototype of a model Test cricketer in England, and yet ineffectual abroad.

“There are two ways to view this discrepancy. The first is that Woakes is soon to turn 33, is bowling slower than on the previous Ashes tour and should now be viewed as an admirable Test cricketer who England are best served moving on from.

“As England seek players who can win in all climes, Woakes is unlikely to be part of the solution. And yet using Woakes to fulfil the need for Ashes scapegoats would surely amount to a waste. If Woakes’s limitations as a Test cricketer have been exposed, they should not obscure quite how magnificent he has often been in England: not since Fred Trueman has an English seamer taken more wickets at a lower average at home.

“Only a very few Test cricketers can thrive the world over; it is no shame that Woakes is not quite in this category. But, as England attempt to cope with their saturated schedule, this also presents an opportunity. By moving on from the idea of selecting Woakes overseas, like a spin bowler considered an Asian specialist, England could prolong his Test career, making him fresher – and even more effective – at home.”

Andy Bull, writing in the Guardian, produced the best piece of the day, including this epic opening paragraph.

“According to reports, the England team took a charter flight to Hobart. Watching them play on the first day at the Bellerive Oval it looked more like they had travelled by ancient sailing bark, and arrived, like Abel Tasman, soiled, sore, and ship-worn, half-starved after six months picking weevils out of biscuits.

“Battered, cut, and bruised, suffering from strains, niggles, aches and breakdowns, a loss of form, and a lack of faith. Between the 11 of them it felt like if you cherry-picked the best bits from each they could just about cobble together one fit, functioning, and happy Test cricketer.

“The record books show this is the shortest Ashes tour the team have ever taken, but from the look of them, it must be starting to feel like it’s dragged on awfully long.”

“England started to fall apart almost as soon as Root made his first bowling change. Chris Woakes, hopelessly short of form and good-feeling after being dropped from the team, seemed to have forgotten how to do the one thing that’s always come so naturally to him, and couldn’t settle on a line, or a length. Mark Wood wasn’t doing much better.

“Then Ollie Robinson went off injured just after lunch, and, when he came back on again, spent the rest of the day hobbling geriatrically around the outfield, sometimes throwing the ball back underarm from the deep. With Ben Stokes unable to bowl because he came into the game carrying a side-strain, the only option Root had left was to bowl himself, which is how England ended up delivering 10 overs of part-time off-spin in conditions which were tailor-made for seam bowling. The score at stumps should have felt encouraging, but spoke, instead, of an opportunity missed, and a chance let slip.”

Scyld Berry in The Telegraph, gave Head a rave review.

“Counterattacks in Test cricket do not come finer or fiercer than Travis Head’s. One minute Australia were on the ropes, for the first time this series, the next England had nobody who could bowl a dot-ball.

“Easier to counterattack at number five than in the top order; nevertheless, the pink ball was only 10 overs old when Head went in at 12 for three and still jagging. It might well have continued to seam if Head and Marnus Labuschagne had allowed England to bowl a fullish length, but they instantly highlighted the brittleness of England’s current Test cricket in all departments.”

Former England captain Mike Atherton, in The Times, said: “The centrepiece of the day was a sparkling hundred from Travis Head, who began the series in tip-top form before Covid struck, and is finishing it so.

“As at Brisbane, this was a gleeful counterattacking innings and in two thrilling partnerships, firstly with Marnus Labuschagne (71 in 12.2 overs) and then Cameron Green (121 in 26.4 overs), he snatched the game from England’s grasp. To his brutal cutting and driving through the off side, no answer came.”